Google announced open-source Chromium OS 2 days ago. today I tried to build it on a Ubuntu virtual machine. But I failed, had numerous problems I won't elaborate. I will try again sometime later.

I searched web and found a VMWare virtual disk of ChromeOS here. So I downloaded it.

Not wanting to install VMWare, I converted it to a raw disk image and loaded it to XEN with HVM, it worked. But it basically unusable for me mainly because of mouse movement was too slow. I will try with a different vnc client later to see if it improves. 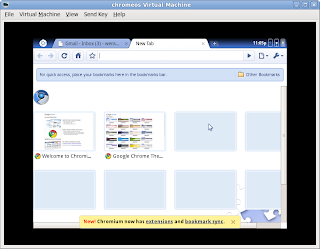 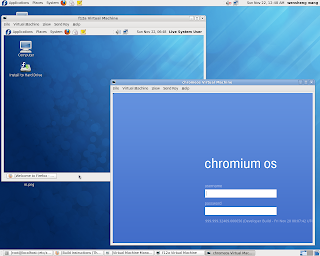 I had to use standard VGA driver(stdvga=1), the default Cirrus Logic driver give me a screen like this after I login: 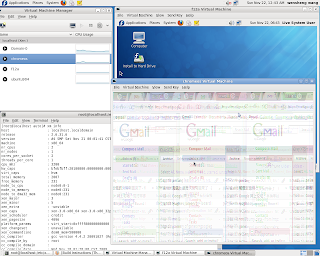 Have you tried out my latest Google Chrome OS build?

There are bugs in my previous build of chromiumos (Chrome browser-related). It is not fully functional. You should not use my previous build as seen in the following Youtube video: http://www.youtube.com/watch?v=Icl59WmC56I

The current build works on Xen properly. You should download the latest image.

It is very easy to convert a VMDK image file to a Xen HVM domU image file if you want Google Chrome OS to work in a Xen environment as a fully virtualized guest operating system.

This is the guarantee that my latest build of chromiumos VMware virtual machine vmdk image will work with Xen (conversion required), VMware Workstation & Player, and Sun VirtualBox.

Hi, En Ming,
I will try your image during thxgving weekend.